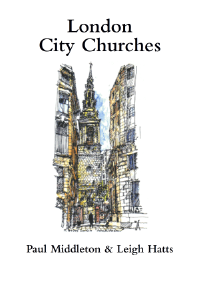 Revealed in this book on the City of London's churches is not only the history from Roman times but some surprising activities.

London City Churches has 41 drawings by Paul Middleton of the churches and each one is accompanied by a page profile highlighting history and the contemporary role.

You can learn about Dick Whittington's tomb, a 'camembert cheese' altar, the Samaritans' first telephone, the pulpit used by Jeffrey Archer and the church featured at the climax of the film Four Weddings and A Funeral.

Paul Middleton is an architect, who has designed an ecumenical chapel in India, and founder of the annual City Churches Walk which opens all the churches on the same two days a year.

Leigh Hatts is the former editor of the Diocese of London newspaper London Link and author of several books on the River Thames.

We've now sold out of copies of the book.

"An invaluable guide to the City Churches"
Catholic Herald